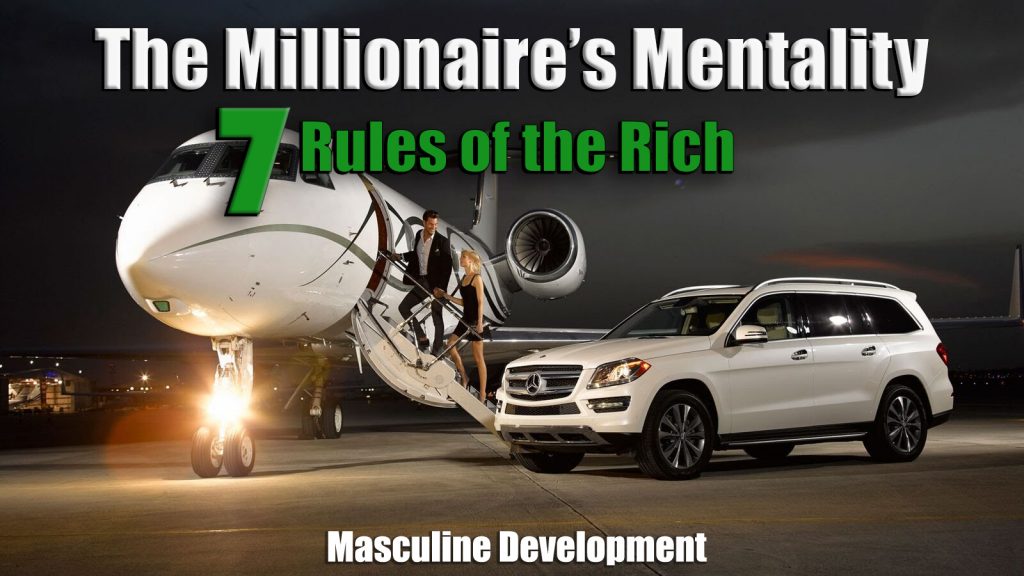 If you’ve ever spent time with millionaires, or even billionaires, you’ll know that they see the world differently.

The millionaires of the world are millionaires, because they understand the principles of wealth. They understand how the markets work, how business works, and how money works. So I’d like to ask you, how many of these rules are you breaking?

#1 – The Rich Believe Money is Good

Have you ever been around broke jokers before? I certainly have…and do you know what they all have in common? They believe that money is bad.

“Yeah man, those rich people! Always stepping on heads and screwing society over!” they’ll say. Believe me, I used to be one of those guys—until I opened my mind and started actually striving to better my life. Then, things began to really change.

This is one of the things that pisses me off, when people talk about the Tai Lopez 67 steps course. They all shout: “Tai Lopez is a scammer! He’s ripping people off!” And I simply reply with: “How?”

The amount of money that you have is simply a reflection of how much value you offer the world. Bill Gates is a multi-billionaire, because he revolutionized the entire tech industry. If it weren’t for him, you wouldn’t be reading this blog right now on your computer (or iPhone, had Steve Jobs not invented one).

Where the needy and the destitute believe that money is evil, a rich man understands that money is good. Money can be used to build shelters, to support local businesses, to improve the economy, to buy new products, and to make the world a better place. Money is good—it allows you more power in the world.

I was talking to one of my buddies from college the other day, and it was interesting to see his thought process. See back in college, he was always out partying and having fun, while I was stuck in my dorm room building my online empire for weeks at a time.

When I first started Masculine Development, I made absolutely NOTHING for the first year or two. But like a true entrepreneur, I kept grinding. I kept hustling. And now? I’m earning hundreds of dollars a day in passive income. I put in the work first, because I was thinking long term.

The poor are always concerned with how they feel right now. That’s why they eat foods that kill your testosterone. They taste good, but wreck your health in the long run. They buy flashy shoes and expensive jewelry, instead of investing their money in the stock market or cryptocurrencies.

The rich are willing to put in the work now, for a reward later. They’re willing to start a business and work 100 hours a week for YEARS, in turn for having millions of dollars in their late 20’s and 30’s that they can use to travel, follow their interests, and build a better lifestyle with.

#3 – The Rich Are Proactive

In Stephen Covey’s seminal work The 7 Habits of Highly Effective People, he touches upon a very important concept known within the upper circles of the rich. Covey makes an extremely important distinction between proactivity and reactivity, which very few people ever grasp.

The poor are constantly reacting to life. They’re reactive. “Oh I feel so bad, let me watch TV to feel better,” they’ll say. “I have no money, let’s scramble to get some by taking extra shifts and not sleeping for two days straight,” they’ll say. Big mistake.

The rich on the other hand, are proactive. Rather than being blown around like a leaf in the wind, they CREATE their lives. “Oh, I feel bad? Let me get to the root of this and solve it,” they’ll say. “I have no money? Let me plan 2 years ahead and get rich,” they’ll say.

Rather than simply reacting like one of Pavlov’s conditioned dogs, they create their own reality by proactively striving for a goal. They aren’t blown around like a leaf in the wind, they ARE the fucking wind—they dictate where their life is going, and proactively take steps to get it there.

I was watching an interview with Tai Lopez the other day, and something he said really struck me as interesting. For those of you who live under a rock, Tai is an internet marketer who’s known for promoting the value of “knowledge,” and telling people that they should read a book a day.

Homo sapiens (that’s us) are the dominant species on the planet, because of our ability to pass down information from generation to generation. The rich understand this, whereas the destitute and poverty-stricken constantly fail to see the connection between learning and earning.

The poor stop learning after school, whereas the rich continue learning well into old age. The rich spend thousands, sometimes MILLIONS, on education each and every year. They purchase video courses, books, consultation sessions, and more. They’re constantly growing, because they know that the more you learn the more you earn.

This is why the 10x rule is so important. Lots of people get to a certain point in life, and then they STOP growing… well, how the hell do you expect to become a millionaire, if you STOP hustling once you’re making 6 figures? You can’t! You’ve got to keep growing… and that’s something that the rich are especially good at.

#5 – The Rich Invest in Themselves

If you go to a poor person’s house, what are some of the things you always tend to see? For starters, they almost always have a really big flat screen TV, a silver Cadillac that they can barely afford to lease, and a bunch of luxury brands that they bought on credit.

Do you know what you’ll see if you go into a rich person’s house? Probably a lot of the same things, but here’s the key: they waited until AFTER they got rich to buy these things. When they weren’t rich they were constantly investing in themselves, buying books, buying healthy food, working out, and spending time improving themselves.

In the words of billionaire investing mogul Warren Buffett: “Ultimately, there’s one investment that supersedes all others: invest in yourself. Nobody can take away what you’ve got in yourself, and everybody has potential they haven’t used yet.”

The rich understand that THEY are their most valuable asset—so what do they buy? They buy healthy food, so that their brain functions better. They buy better technology, so that they can work more efficiently. They buy things that make their lives easier, so that they can have more time to spend on what matters. They INVEST in themselves.

Have you ever seen one of those poor little old ladies at the grocery store checkout, who’s spent literally hours collecting dozens of the best coupons she could find? She spent hours clipping, collecting, and organizing coupons—and all for what? So that she could save like $10 on a $120 bill.

This is a classic example of the poor person’s mentality. They focus on saving piddly little amounts of money by clipping coupons, buying sales, and shopping for discounts. They try to save $3 a day by cutting out that cup of Starbucks coffee, and instead making some crappy Folgers brand garbage.

Do you know what the rich do, though? The rich say fuck that $3 a day—I’ll just earn $3,000 a day. Rather than focusing on cutting out petty little expenses, they just earn so much that the little expenses become completely irrelevant.

There’s a great quote from the Wolf of Wall Street that aptly summarizes this rule, as well as my general approach to life. As Leonardo DiCaprio’s character is giving a speech to his company, he tells them to “solve your problems with more money.” This is how the rich think. Focus on earning.

#7 – The Rich Are Process Oriented

If you’ve ever been in a gas station late at night, you’ll know there’s always that one bum who’s spending his entire day’s earnings on lottery tickets. As everyone’s waiting in line to buy their goods and get more gas, some dude continues to shell out $20, $30, or $50 on lottery tickets, in the hope that he’ll strike gold.

This effectively summarizes the mentality of the poor. They think that “overnight successes” are an actual thing. They’re not. The poor think that people just “got lucky,” and that some magical event happened that suddenly threw billions of dollars into their bank account. This is not how money works.

The rich understand that money comes from PROCESSES, rather than EVENTS. The media likes to glorify the actual event—the going public of a company, the release of a new product, or the kid in his early 20’s who just became a millionaire. They focus on the event.

There’s many ways that the rich are different from the poor, but the most pronounced difference is in how they think. It’s incredible how stark the contrast can be between the way that poverty-stricken men view the world, and the way that wealthy investors view the world.

As you read through this list, ask yourself: “How many of these beliefs do I have?” You’ll likely find that you only have a few, or maybe not even one. That’s the good thing, though—like I said, wealth generation is a skill set. It can be learned, and you can learn it right now.

Focus on earning more money rather than “just getting by.” Always invest in yourself. Learn something each and every day. Read, read, read, and read some more. Understand that money is good, and most importantly, take massive action to get what you want in life.