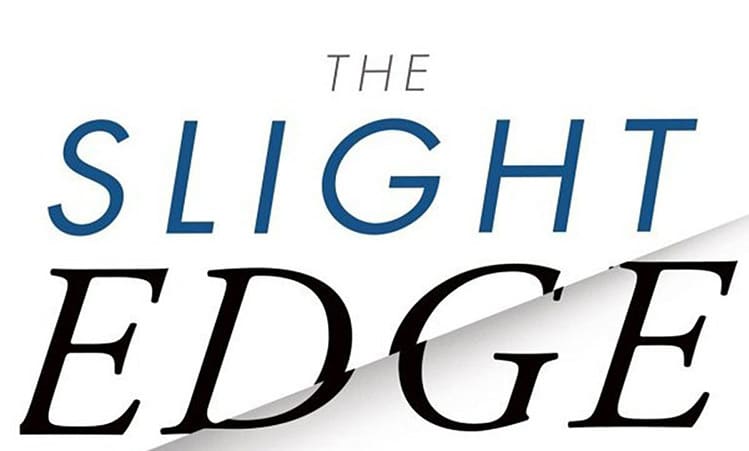 Jeff Olson: Why Most People Fail 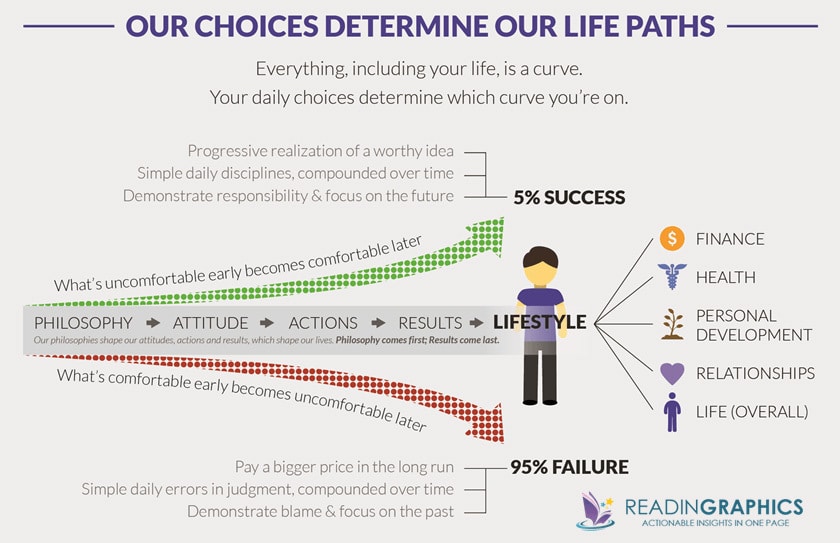 In his book, The Slight Edge, Jeff Olson talks about why some people seem to constantly achieve their dreams, while others fail one time after another. What’s the difference?

The difference, put simply, is that the habits which lead to success are actually very easy to do, but also very easy to not do. The same habits that YOU KNOW will make you successful, are very easy to just skip for the day (which often turns into never doing them at all).

For example, take some of the habits that lead to success:

They’re pretty easy to do. But unfortunately, they’re also very easy not to do. It takes much less effort to:

In short, people fail because the things that lead to success are easy to do…but they’re also very easy not to do.

How easy is it to just read a phenomenal book for 30 minutes a day? Pretty easy. Just make it a part of your evening routine. But, how easy is it NOT to do that and just watch TV instead? Pretty easy, as well.

How easy is it to utilize Pareto’s Law for productivity? Pretty easy. But how easy is it to just do what you want to do, without rhyme or reason? Even easier. Do you see the point?

The Slight Edge is Compounded Over Time 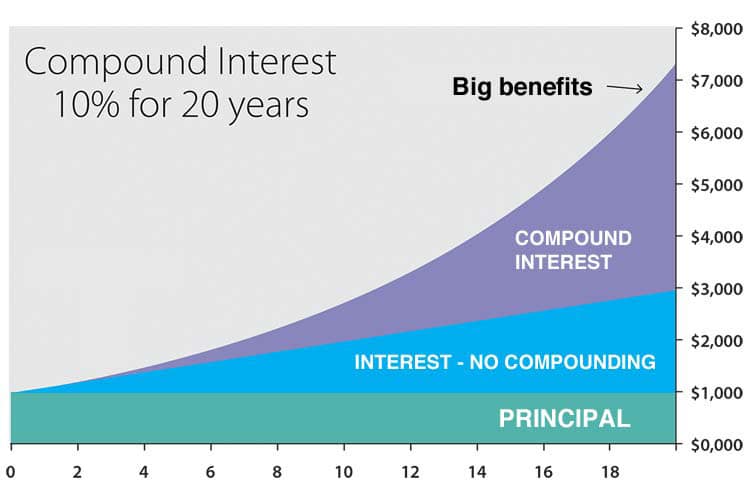 While it may not seem like a lot if you just decide to take it easy for a day or two, over time this actually has a massive effect. Just improving yourself by .1% every single god damn day, will add up tremendously over time.

To illustrate this point, let us point to an example in investing:

This kind of monetary gain is very easily possible, seeing that I tripled my money in 5 months after Brexit sent gold prices through the roof.

Another illustration of this effect has to do with habits that improve you by just 1% every day. 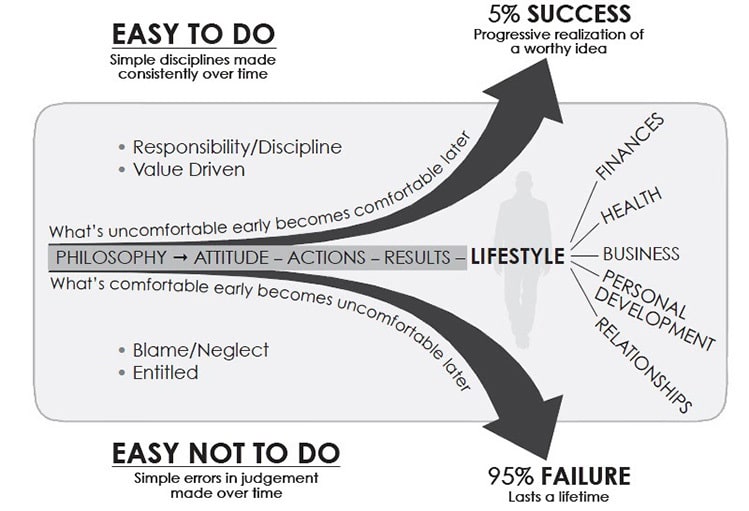 To use an example of the slight edge in action, let’s use two people named Jon and Jerry. Say that Jon is a pretty average guy, but he stumbles across my blog one day. He decides that it’s about time to start changing his life. He’s fed up with his driving his 1983 Toyota Camry, getting into arguments with his bitchy girlfriend, and working his dead-end job.

Then, there’s Jerry. Jerry doesn’t like his life either, but he’s just a lazy sack of shit who would rather put others down instead of pull himself up. Let’s contrast these two men and see how their “slight edge habits” play out in the long run.

Jon spends just 30 minutes a day reading a high quality book, while Jerry decides to spend that 30 minutes watching an episode of Family Guy every night after work.

The difference might not be apparent at first, but over time, the slight edge will take its course:

Do you see how something as simple as reading 30 minutes a day can have such a massive effect when compounded over time? This is the power of the slight edge.

Meanwhile, Jerry is still stuck working the same old job, arguing with his ugly girlfriend, and 6 months behind on his credit card bills. Yet, he continues to “relax at the end of a long day’s work,” by watching Family Guy, not realizing that he’s the one causing the problems in his life.

Say that Jon decides to spend 30 minutes meditating every day. Again, at first he won’t notice much of a difference, but compounded over time, the slight edge that meditation gives him will be drastic:

Do you see the point? Any activity that’s good for you, even if you only do it for 15-30 minutes a day, will add up over time to create a massive difference in your life. This is the power of the slight edge.

Again, say that Jerry decides to watch his daily episode of Family Guy instead of meditating. Rather than being in a calm, collected, state of mind after a while, he’ll still be in the same place as before.

When his girlfriend starts arguments, he’ll lose his shit and start screaming and yelling at her. He’ll be depressed and anxious all of the time, and won’t know why. He’ll be stuck working the same dead end job for the rest of his life, all the while blaming “the system” for his own lack of action.

Jon tells his friends that he’s going to start working out, and they laugh at him:

But Jon is committed—he starts working out. At first, he doesn’t notice that much, but eventually he’ll reap the rewards. This is the slight edge in action: little efforts each day compounded over time.

In reality, there’s a lot of slight edge habits. The slight edge can be applied to nearly every area of your life:

There’s a million ways to effectively utilize the slight edge into your life, but remember: it also works the opposite way. If you have tiny little habits that are bad, they’ll also effect your life in a negative way compounded over time.

To refer back to the “Jon and Jerry” example, let’s say that Jerry likes to have some ice cream every night. “It’s not that big of a deal,” he says. “Yeah, it’s not that great for me, but I mean come on! You have to live a little, right?”

Here’s what will happen to Jerry due to the negative slight edge:

If Jerry just stopped eating the fucking ice cream every night, this could have all been avoided. But that’s the point. Now, he’s stuck in a negative self-amplifying feedback loop.

Jerry Watches TV Instead of Reading

Instead of reading a high quality book, Jerry decides to watch TV for 2 hours every night.

He justifies it in all sorts of ways:

But the fact of the matter is that Jerry has a negative slight edge habit—one that has a very small negative effect, but compounded over time will be quite drastic.

And do you know what’s sad? This is 99% of Americans. Most of us waste our lives away watching TV. Most of us aren’t even living.

TV is one of those sneaky little slight edge habits that works against you, because unlike eating ice cream or smoking, it won’t really cause anything bad to happen. It’ll just cause you to stagnate and stay where you’re at.

One day you’ll wake up and realize that you’ve done absolutely nothing with your life, because instead of watching TV for 2 hours every night you could have spent those 2 hours: 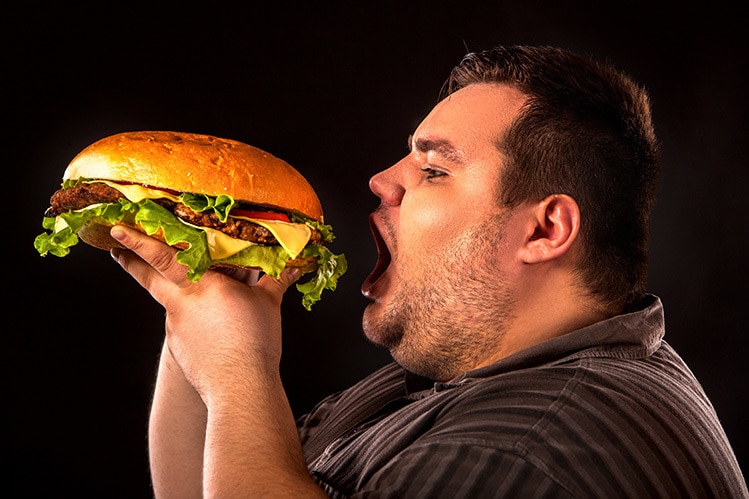 Some of the slight edge habits that are negative include:

I want you to scan your life for any of these habits right now—they’re a lot sneakier than you think.

It’s very easy to let them slip into your life without you even realizing it. But I want you to ask yourself a question: if you don’t stop this habit right now, what will it end up costing you in 5 years? If the answer is something bad, then get rid of the fucking habit.

Now, don’t misunderstand me—there’s a time and a place to relax. Human beings need rest, but 99% of people need to work more than they do to rest. Only very high achievers need rest.

Sometimes it’s good to have some ice cream with your girlfriend or to relax and watch a movie, but the point is that it isn’t a habit. It’s just something that you do every now and then (like a few times a month rather than every day). 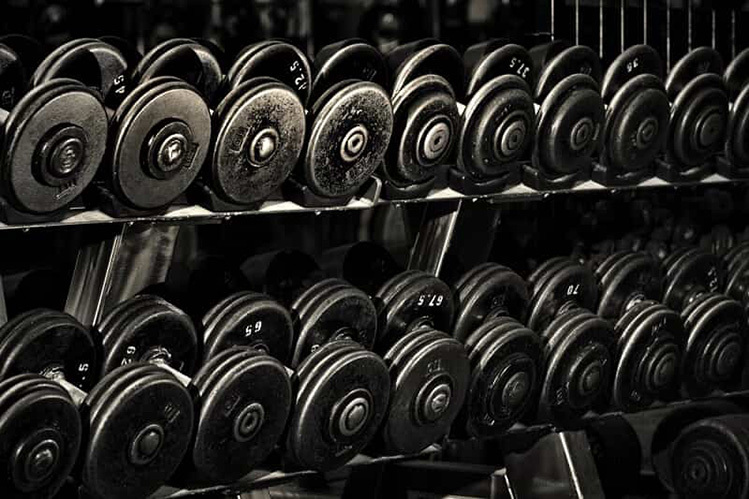 Some positive slight edge habits include:

Literally anything that, over time, will lead to a positive change in your life, is considered a slight edge habit. The best slight edge habits, like lifting weights or eating good food, will create a noticeable impact within just a few weeks. Others might take longer, like reading or investing, but you should still do them, too.

But remember—good slight edge habits are just as easy to do as they are to not do!

The next time you hear yourself saying “Ehhh, maybe I’ll just do it next time—I’m tired.” I want you to slap yourself in the fucking face, stop being a bitch, and do what it is that you don’t want to do.

If you spend that extra 30 minutes a day improving yourself by just 1%, within a year you’ll be leaps and bounds ahead of your competitors. I hope that you choose to use the advice that I’m giving you, because either way, the slight edge is working in your life. You just have to decide if it works for you, or against you.

Before you go, take massive action and answer these questions, either on a piece of paper, or in the comments section below:

4 Foundational Habits That Every Man Should Practice Daily

The #1 Best Morning Routine for Massive Success in Life

Previous Post Why Girls Think You’re Creepy (And How to Not Be Creepy) Next Post Gym Gear: 4 Best Deadlift, Squat, and Bench Straps in 2021