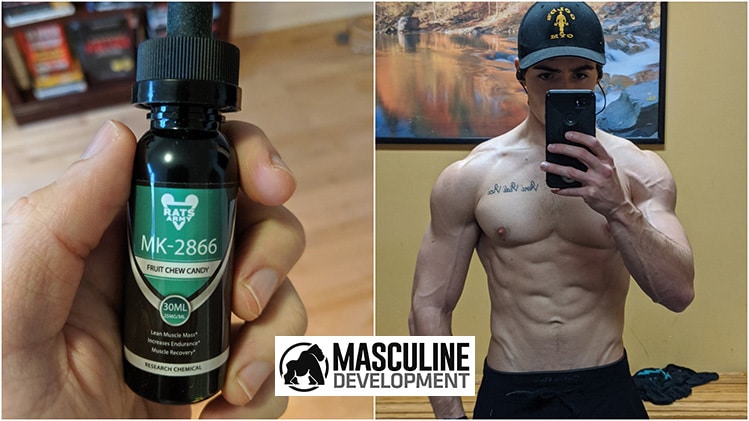 If you’re like most people, you probably don’t like the taste of SARMs. You know what I’m talking about… that gross-tasting alcohol flavor.

Of course, most of us just suck it up and use our alcohol-flavored SARMs, but what if I said that you could get sour gummy flavored SARMs?

I’ve recently been trying out the SARMs from Rat’s Army, and I want to write a full review article on their FLAVORED SARMs…

And, of course, the results I’ve been getting from this stack of RAD 140 and Ostarine. So, grab a cup of coffee, and let’s get to it.

If you had told me that flavored SARMs existed just a few months ago, I would’ve thought that was the most ridiculous idea of all time.

Like most people, I just thought that you had to deal with the weird, alcohol taste of SARMs. Of course, I just sucked it up and didn’t complain.

After getting shipped some chewy fruit candy flavored RAD 140 from Rat’s Army though, I have to say… I’ve seriously changed my mind.

It isn’t just RAD 140, though. They’ve got all kinds of flavored SARMs:

Hell, they’ve even got flavored Tadalafil for sale on their website. I don’t know what Cialis has to do with SARMs, but hey, I can’t complain.

Are Their SARMs Legit, Though?

Now obviously, the most important thing is whether or not your SARMs are actually legit. Who cares if they taste good, but don’t work… right?

Thankfully though, after being on their RAD 140 and Ostarine for about a month now, I can personally tell you that their SARMs are 100% legit.

I took the liberty of taking a “before and after” picture, which you can check out below. That’s just from 30 days of being on their flavored SARMs—so far, Rat’s Army gets a 5-star review from me.

And, when I’m completely done with this 90-day cycle, I’ll put the full before and after results, right here. I can’t WAIT to see what I look like.

Now, Like I said… I’m only about 30 days into my cycle, and I’ll post the full 90 day stack results in about two months when I finish this cycle.

Just like I published my SARMs before and after results, after taking Ostarine, Cardarine, and Ligandrol, I’ll do it for this stack, too.

But, so far, these are some of the best SARMs results I’ve ever had… and they taste like a freaking gummy bear, too. Great results, and great taste.

This has been my SARMs bulking stack so far. I haven’t gotten my body fat measured yet, but I’ve put on 9 pounds in the past 30 days alone.

That probably means I lost at LEAST 3-4 pounds of fat, and put on around 9-10 pounds of muscle or so. My strength has also gone WAY up.

Like I said, they taste delicious. They’re some of the best SARMs I’ve ever had, and they taste like a freaking gumdrop for God’s sake.

I will admit, the RAD 140 tastes a lot better than the Ostarine, though. I think they’re probably just improving their formula or something.

Either way, to take their liquid SARMs, just squeeze the dropper to measure out your dosage, and put them right onto your tongue.

I usually let them sit under my tongue for 15 seconds or so, because it’s been proven to hit you way faster when you take them this way [1].

Why I Prefer Liquid SARMs

As I’ve said before, I’m a big fan of liquid SARMs, because they’ve usually got a higher chance of being legitimate than powdered SARMs.

In my experience, powdered SARMs aren’t always fake, but most of the time, if a company wants to make a quick buck, they won’t go through the extra hassle of turning their powdered SARMs into liquid form, and buying all the dropper bottles.

Now, are there FAKE liquid SARMs? Yeah, of course. No shit. That’s Why I’ve exposed these scammy SARMs for sale before on my blog (read that).

In general though, most scam companies don’t want to spend an extra $5,000 on liquid preservatives and dropper bottles for their fake SARMs.

So, if you’re in doubt, and you don’t know where to get legit stuff, it’s usually a good choice to go with a vendor who sells liquid SARMs.

All in all, I was pretty satisfied with how fast their flavored RAD 140 and Ostarine got to my doorstep. It was shipped in less than 24 hours.

The package was pretty discreet, all it said was my address, and the address of where it was sent from. It said nothing about SARMs at all.

My package was very well put together, which unfortunately, is uncommon in the world of SARMs scammers and bullshit.

I’ve had several shipments from different vendors come in, and when I opened it, they were leaking fucking SARMs juice all over the place.

Thankfully though, the SARMs stack I got from Rat’s Army arrived within just a few days, and it’s a good thing, too. I couldn’t wait to start my cycle.

Now, I’m sure you probably have a lot of questions. I definitely didn’t know what the FUCK I was doing for my first SARMs cycle.

So, I’ve compiled a list of some of the most common questions I get, about the best dosages, liquid SARMs, how to take them, and more.

If you feel like I left anything out, just leave me a comment down below. It might take me some time to respond, but I always try my best to do so.

Normally, most liquid SARMs taste like rubbing alcohol. This is due to the preservative that they put in the vials, to keep the SARMs fresh.

When you buy from Rat’s Army though, you’ll get the best SARMs you’ll ever taste. Seriously, I was pretty shocked when I first tasted them.

Most SARMs taste AWFUL, and of course, most dudes suck it up, because they want to get jacked. There’s nothing wrong with this at all.

But, if you had the choice, why wouldn’t you just get some SARMs that not only TASTE good, but that work really fucking well? Seems obvious.

Why Do My SARMs Taste So Bad?

Most SARMs taste absolutely disgusting, because they’re filled with ethyl alcohol, a common preservative used to keep them fresh [2].

And while this preservative does its job, and stops bacteria from growing in your Ostarine bottles, it also tastes pretty fucking nasty.

Obviously, if you already bought some regular (non-flavored) SARMs, just take them and get jacked. You’ll thank yourself later.

But, if you have the choice, I’d highly recommend you invest in some fruit chewy flavored SARMs. It makes them way easier to take sublingually.

Can I Mix SARMs With Something Else?

If you absolutely can’t stand the taste of non-flavored SARMs, then yes, it’s completely okay to mix it with something else to make it taste better.

When I was on my cycle from Proven Peptides, I would just drop my daily dosage into a glass of water, chug it down, rinse, and repeat.

If you want, you can also mix it with a glass of orange juice, grape juice, or some other type of liquid that’s sweet, to mask the flavor of alcohol.

How Do You Take Liquid SARMs?

Taking liquid SARMs is pretty simple. They come in a little dropper bottle, so you just squeeze the dropper until it’s full, then put it in your mouth.

For my current SARMs stack, I’m taking 20mg of RAD 140 and 25mg of Ostarine each day, which is about one full dropper of each.

Personally, I just take them first thing in the morning. I down my delicious SARMs, chug my Nitraflex pre workout, and hit the gym.

The guys over at Rat’s Army hooked me up with a pretty generous coupon code, you can use to get 20% off your entire order.

They’re a brand new company, and they’re still growing, so they’re pretty eager to get their SARMs in the hands of eager young bucks like yourself.

Just plug in the code “MD20” and you’ll get 20% off on whatever delicious, flavored SARMs you want to buy. You can keep re-using that discount code, too—it never expires.

And by the way, Rat’s Army is currently having a sale on their mass stack, which combines RAD 140, Ostarine, and YK-11, all in one.

So, if you’re a beginner newbie who’s desperate to get jacked, I SERIOUSLY urge you to check that mass stack out.

You’ll be shredded in no time.

All in all, I’m pretty excited about the flavored SARMs I got from these guys. So far, their RAD 140 and Ostarine have been treating me well.

In fact, in just 30 days, the scale has gone up by 9 whole fucking pounds… and that’s including the 3-4 pounds of fat that I lost, too.

If you want to use the code “MD20” you can get 20% off on your first SARMs order… I highly recommend you try their mass stack.

As always, if you guys have any questions, feel free to let me know in the comments section down below. I LOVE reviewing new supplements for a living, and I hope you guys all enjoyed the article! I’ll see you next time.

Normally, SARMs taste pretty bad. This is because manufacturers use ethyl alcohol, a common preservative, to prevent the SARMs from going bad. While this is certainly a good thing, it can cause your SARMs to taste pretty disgusting.

This is why I recommend opting for some flavored SARMs, such as the ones from Rat's Army. Their SARMs taste like fruity gummy bears, and they're still extremely effective (I tested them myself). To see my results, read the full article.

If your SARMs taste like alcohol, it's because the manufacturer you purchased them from is using ethyl alcohol to preserve them. While it certainly doesn't taste good, many manufacturers use this compound to prevent their SARMs from going bad.

It depends on where you get them from, but most liquid SARMs taste pretty bad. This is because of the preservatives that manufacturers put in their SARMs to prevent them from getting a bacterial infection.

Rat's Army has a new line of flavored SARMs on the market however, which taste like gummy bears. I tried them for 30 days and posted my results here, and let me tell you something... not only do their SARMs work, but they taste pretty damn good, as well!

Previous Post Gorilla Mind Rush Review: The Best Nootropic in 2021? Next Post 21 Tips to Get Jacked As F*ck! (From A Fitness Insider)