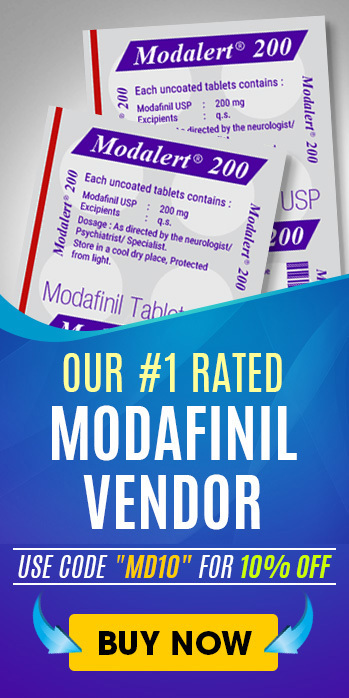 Chances are you’ve heard of modafinil before, but did you know you can stack it with other nootropics for even more cognitive benefits?

It’s true. In fact, I’m going to show you some awesome modafinil stacks that I use for enhanced performance at work, better focus, and more.

This is straight from the horse’s mouth, too—this is coming from a bio-hacker who’s taken modafinil for almost 10 years now.

So, if you want to discover the best modafinil stacks on the market right now, and how to make your OWN stacks, then keep reading.

Why Modafinil is a Nootropic

Before we get into other nootropics to build a modafinil stack with, let’s do a quick recap of the modafinil cognitive performance benefits.

Modafinil is one of the best nootropics on the market right now, that entrepreneurs such as myself are using to dominate business.

Originally designed as a wakefulness agent for the treatment of those with sleep disorders (such as narcolepsy), bio-hackers soon caught on.

Here’s some positive effects of modafinil:

I first many years ago, and I can confirm that these cognitive benefits are 100% legit (not just hype).

Now, if modafinil is such a powerful smart drug, then why would you need to stack it with other nootropics? To make it more powerful, of course.

The whole idea behind a nootropics stack is that you take multiple smart drugs at once, to get even more of an added cognitive benefit.

You have to be careful, though—this is advanced bio-hacking. If you don’t know what you’re doing, you could end up hurting yourself.

That’s why it’s always important to do your research. That being said, here’s how I approach using a modafinil stack with other nootropics.

I’ve been using nootropics for a decade now, for all kinds of reasons—better sleep, mental performance, to reduce anxiety, and more.

So far, my favorite modafinil stack is with Gorilla Mind Rush, a nootropic supplement that I’ve been using for around a year and a half now.

The reason I like this modafinil stack is because Gorilla Mind Rush already has a ton of nootropics in it, like L Tyrosine for motivation, caffeine for alertness, and much more.

Just one serving of this stuff has:

This has been my go-to stack for months now. Just one pill of modafinil, and a few pills of this stuff, and I feel laser-focused and ready to go.

I wrote a full review of Gorilla Mind Rush if you want the details about dosage & what nootropics it contains. Otherwise, keep reading.

How to Make Your Own Stack

If you want to make your own modafinil stack it isn’t that hard, you just need to know what nootropics have what effects on the brain.

Caffeine, for example, is one of the best nootropics for increasing energy and focus, so it pairs very well with modafinil as a stack.

Nicotine and CBD on the other hand, are great to reduce the anxiety effects that often come from taking a lot of stimulants like modafinil.

Tons of supplements and nootropics stack well with modafinil. You just have to know what their effects are and how to pair them.

If you want a modafinil stack to improve your energy levels, many users love combining it with caffeine, nicotine, and other stimulants.

If you often get anxiety on stimulants, it’s a good idea to combine these nootropics with L Theanine Ashwagandha, and/or CBD oil, too.

This nootropics stack will work very well for increasing energy, wakefulness, mental alertness, and may even improve your mood, too.

Nicotine is a bit controversial, but recent studies actually suggest it’s a nootropic, and can be combined with modafinil for energy. [R]

In fact, I used to combine nicotine with modafinil every single day for about a year, so I can attest to the powerful effects of this stack.

Say you’re one of those users who’s sensitive to modafinil, caffeine, and other stimulants, but you still want to get the benefits of them.

If that’s you, this stack will work great. It will improve your focus and energy, but has nootropics to mellow you out, so you’re not wired.

The modafinil and caffeine in this stack have energy increasing effects on most users, but the other two nootropics will counteract anxiety.

L Theanine, for example, has been shown to pair well with caffeine, as it can reduce anxiety levels without having a negative effect on focus. [R]

I personally take L Theanine daily. I use this brand from Amazon, because it’s clinically dosed, reduces anxiety, and costs less than $0.08 per pill.

Ashwagandha is also a great nootropic to stack with modafinil, because it’s been shown to help users reduce anxiety levels by up to 56.5%. [R]

In addition to being a nootropic that reduces anxiety, Ashwagandha also boosts testosterone levels. This is the brand I use (from Amazon).

Say you want the energy boosting effects of modafinil, but you want to also boost creativity, and have a great mood while you’re on your stack.

If that’s the case, this is it. You can also combine the other supplements and nootropics mentioned with this stack for even stronger effects.

The modafinil effects from this stack are obvious—we already know what this smart drug does for your energy and mental performance.

5-HTP, Aniracetam, and Lion Mane are more interesting, however. All of these nootropics have been shown to have mood boosting effects.

In fact, I take 5-HTP daily. This isn’t really a smart drug, but it’s a building block of serotonin, and studies show it boosts your mood, and may even be an effective drug for treatment of depression. [R]

Aniracetam pairs well with modafinil too, as does Lion’s Mane—they’re both powerful nootropics that help you learn faster, improve short term (and long term memory), and boost overall cognition.

In conclusion, taking modafinil stacks is a great way to boost the cognitive effects of modafinil, and enhance mental performance.

If you’re looking to buy modafinil for your stack, I my favorite vendor is Buy Moda—they’re the best modafinil vendor I’ve come across.

As always, if you have any questions about how to make your own modafinil stack (or anything else), leave a comment down below!

Previous Post Why Girls Are Rude to You (And What to Do About It) Next Post The Law of 80/20: The #1 Secret of High Achievers, Entrepreneurs, and Investors