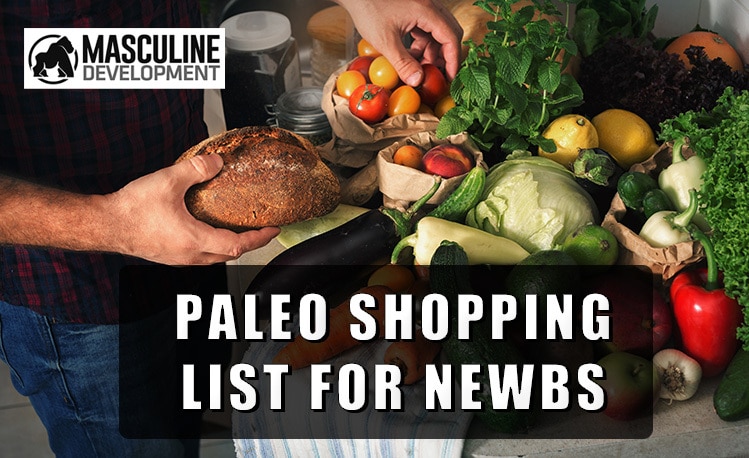 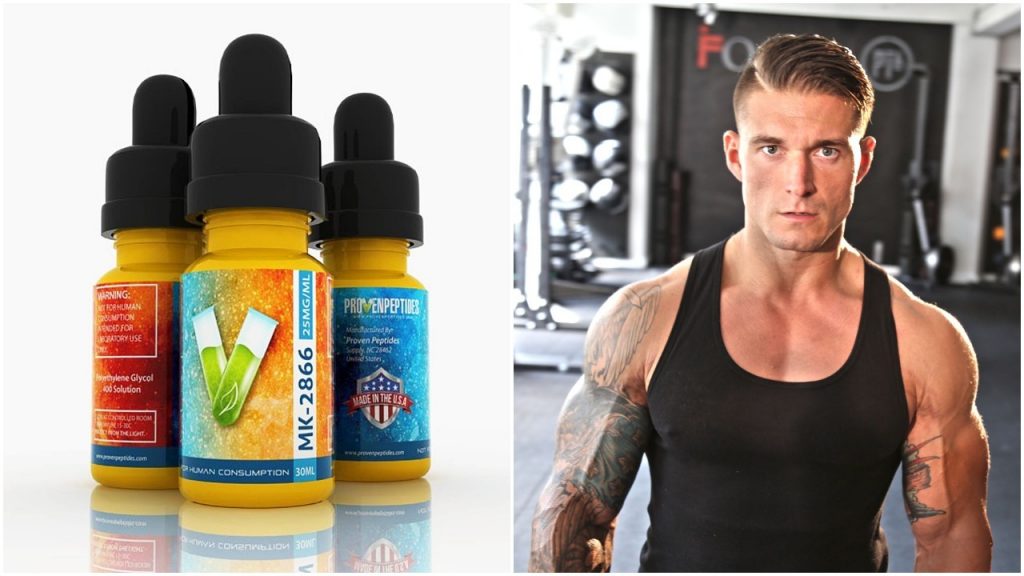 Over the past several years, more and more people have been using SARMs like Ligandrol for bodybuilding, muscle growth, and fat loss.

Ligandrol, also known as LGD 4033, is currently one of the strongest selective androgen receptor modulators (SARMs) on the market.

Valued by fitness models, physique competitors, and bodybuilders alike, it’s extremely well known for its ability to create a cut and dry physique.

First off, though—what are SARMs? Most people aren’t even aware of the their benefits, let alone how to use them the right way.

Steroids get all of the attention, but funny enough SARMs can actually be almost as effective as steroids. What’s better though, is they have almost none of the nasty side effects that steroids do.

In this article, I’m going to present a complete beginner’s guide to Ligandrol, otherwise known as LGD-4033. So, strap in, and let’s get to it. 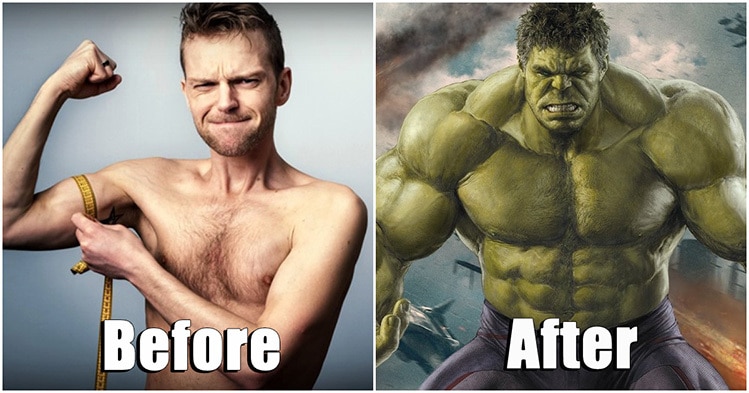 How Long Does It Take To Get Jacked? (Without Steroids)

So how long does it take to build muscle? Well, I remember back when I first started working out. I was maybe 15 or 16 years old, and I’d heard that girls liked guys with some muscle. So, being the testosterone-filled highschool student that I was, I decided to get a membership to my local gym.

I sat down with a personal trainer, and he opened up some program meant to forecast my results. It was supposed to show me what I’d look like after six months on his “program,” and holy shit was I impressed. According to his math, I could literally look like the fucking hulk after just six months.

No, that isn’t an exaggeration. I was 5’6″ and weighed about 115 pounds. By his estimate, I would somehow turn into a 6’3″ behemoth weighing 235 pounds within six months. Needless to say, he sold me on some ripoff program that cost $299 (if I remember correctly), and I walked away happy.

Turns out that building muscle is a hell of a lot harder than that, because six months later, I realized I’d been scammed. I literally hadn’t put on a single pound. I didn’t look any different, I didn’t feel any different, and I wasn’t any stronger. So if you want to avoid this hellish six months of wasted work, I suggest you read on. 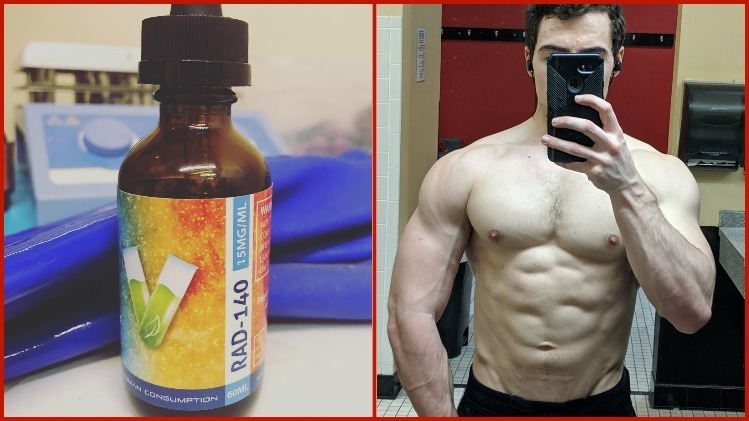 What Are SARMs? The Ultimate Guide to SARMs For Beginners (2020)

If you’ve been lurking around bodybuilding forums over the past few years, you’ve no doubt seen the emergence of a new form of chemical enhancement. SARMs, otherwise known as selective androgen receptor modulators, are quickly becoming one of the most popular alternatives to steroids.

But still, many questions remain. What are SARMs? What kind of results do they give you? Are they legal? How do they work?

…and perhaps most importantly, what are the potential side effects of taking them? The average lifter knows almost nothing about this.

When taken wisely, SARMs like Ligandrol, Cardarine, and Ostarine can have incredible benefits. You will gain incredible strength, put on tons of muscle, and even keep most of it afterwards. The best part though, is that they have almost none of the side effects that steroids tend to have.

With this in mind, I’ve compiled a definitive, ultimate guide on selective androgen receptor modulators. My goal is to cover everything you need to know about SARMs, so that by the end of this post, you’ll be rushing to buy some and put on some of that sweet, sweet muscle mass. 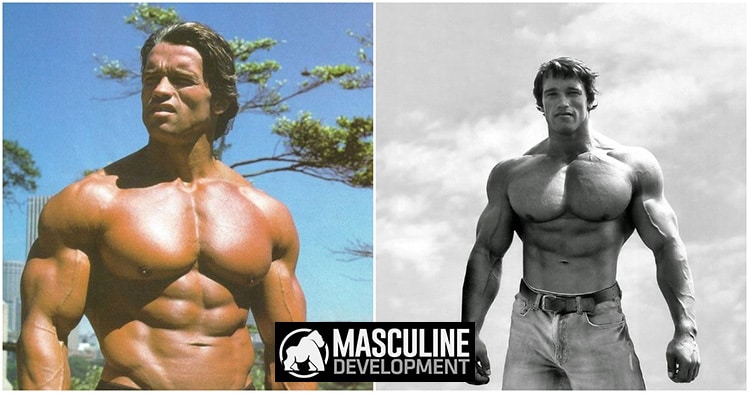 For those who are naturally inclined towards fitness and building muscle, going to the gym and lifting, pressing, and squatting comes almost instinctively. Sure, nobody is born having exact prior knowledge in the matters of the body—it takes patience, dedication, and perseverance to truly achieve the potential of our bodies.

…but this being said, while it certainly does take a long time to get a shredded physique, there are a ton of shortcuts you can take along the way to make things easier on yourself. There’s supplements you can take, routines you can do, and even specific muscle groups you can focus on to quickly gain the appearance of being jacked.

One of which groups is the chest muscles. I’ve always had naturally large pectoral muscles from a young age, and even when I was a skinny little beanpole (at least in my view) people would complement me on them. Now that I’ve spent time building them up however, I frequently get girls rubbing them and squeezing them at parties (no joke).

The first thing that people associate with a “strong man” are the chest muscles. This association has been practically ingrained into our collective consciousness due to popular culture and celebrities like Arnold Schwarzenegger and Ronnie Coleman. Surprisingly enough, while it may take years to get pecs like them, there’s still a few ways to get killer pecs in just a short time. 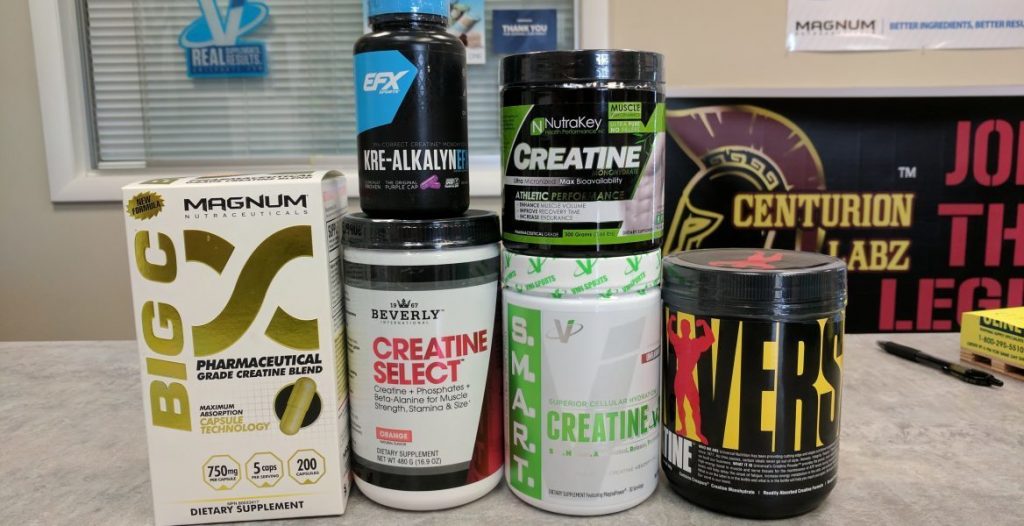 Creatine Crash Course: The Only Guide You’ll Ever Need

In the age of the internet, anyone and everyone can give out advice on supplements—and they do. A simple google search will show that there’s dozens of other “experts” and “gurus” telling you completely bogus myths about supplements like creatine, whey protein, and testosterone boosters.

Bodybuilding isn’t just an art, though—it’s a science. Everything we do can be scientifically verified. So in times like this, where anyone and everyone with a platform is recommending something different, it’s important we turn to science when asking questions like:

It turns out that most of these questions have been answered through extensive research, and although taking creatine won’t make you put on 50 pounds of muscle overnight, it’s certainly a very powerful supplement to add to your regimen. So with that in mind, here’s my crash course on creatine. 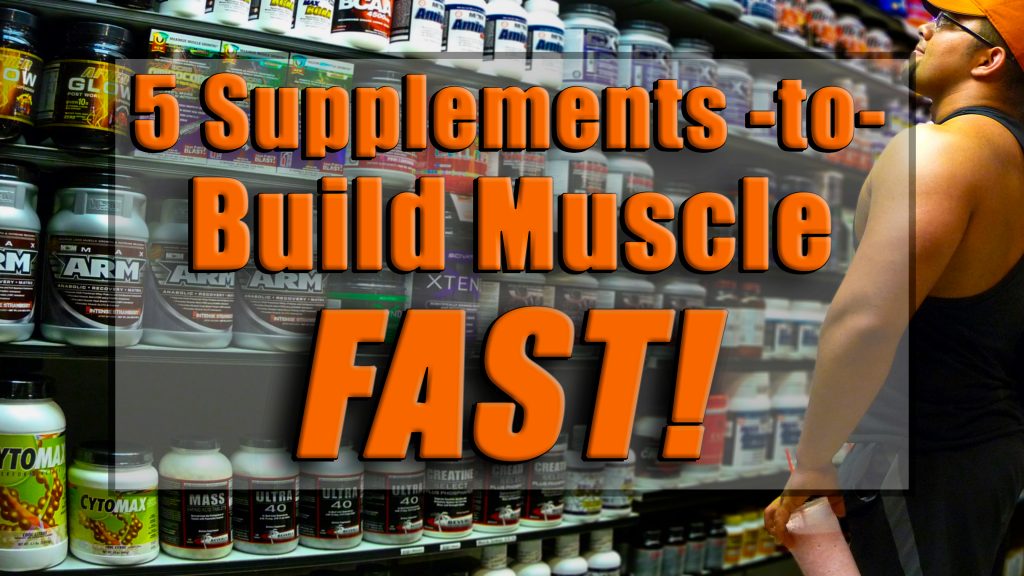 When it comes to making considerable gains in all muscle groups, it’s important to maintain an appropriate nutrient level—this gives workouts something to thrive on. Professional bodybuilders and mere enthusiasts alike are no strangers when it comes to accompanying their training with protein and amino acid-enriched shakes.

Of course, supplements aren’t necessarily mandatory for building muscle. Adopting a clean meal plan that contains only organic and nourishing foods is also an excellent approach if you just want a slower and more soft-core development.

In fact, I’ve already written about how you can bulk on a budget if you’re a college student or just broke, so don’t think that you need to purchase any supplements. Nevertheless, if going down the workout champion route is something you want to do, it’s important to choose an approach that suits your needs and goals best.

Here are the five most effective and widely-used nutritional supplements that are the best for gaining muscle fast. 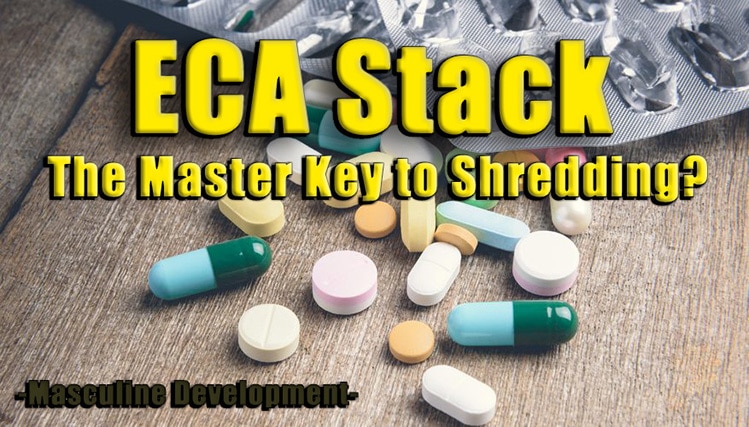 ECA Stack Guide: Can It Really Help You Shred Fat in 2020?

People often turn to fad diets, weird exercise routines, and even steroids to lose weight, but one thing reigns king to them all: the ECA stack.

While it certainly isn’t as powerful as thermogenics such as DNP (an illegal steroid/fat burner), this stack is still considered to be relatively safe.

…but, the question still remains: does it actually work, or is it just another fad supplement that will sell you empty promises?

The truth is that it does. This so-called ECA Stack, short for Ephedrine, Caffeine, and Aspirin, has been used for years due to its ease of acquirement and high effectiveness.

This isn’t something you want to mess around with, though—many of these substances should not be consumed if you’re under 18.

That being said, if you’re looking for a magic bullet to push your fat loss into overdrive, look no further than this stack here.

In this quick, step-by-step guide, I’m going to explain exactly what this supplement is, exactly how it works, and how it can help you burn fat. 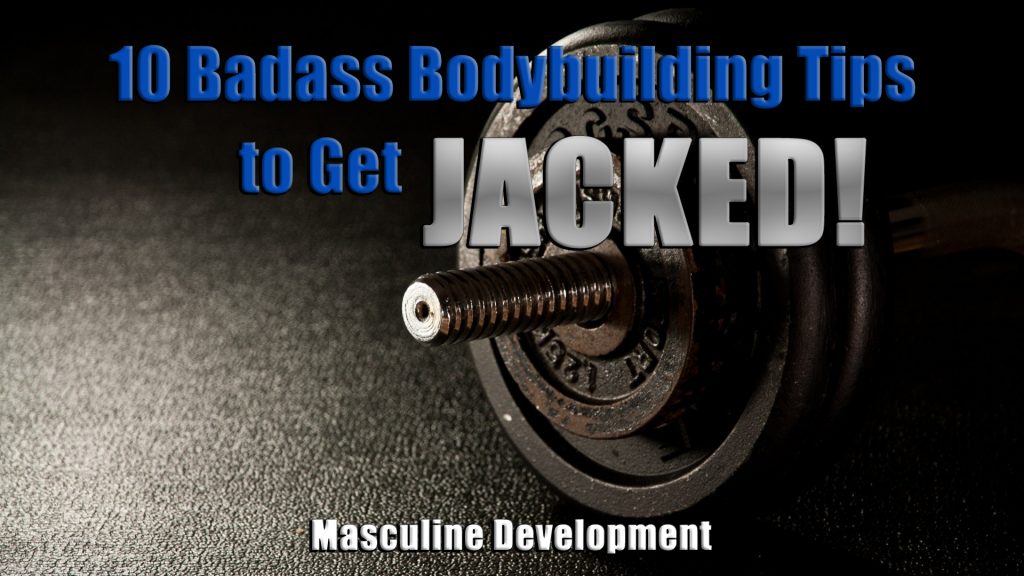 You get to lift weights like an animal, you get to eat tons of really great food, and you get to look like a Greek god.

Every man should have a gym membership, especially in this day and age where very little physical effort is required of us.

If you don’t work out, you’ll slowly turn into a fat slob.

I’ve learned many lessons from the gym.

Some of them were quick to hit me (like don’t lift more than you can handle), and others took years to realize (like the value of discipline).

Overall, bodybuilding has made me a better man, and it can do the same for you.

Here’s 10 badass bodybuilding tips I learned from my skinny to buff transformation. 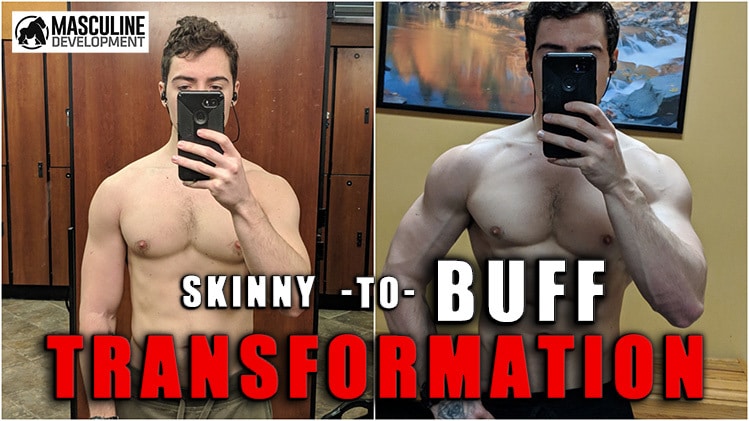 “How can I go from skinny to buff?” I remember thinking, as my 14-year-old brain scoured the internet looking for any and all advice I could find. It seemed like everyone was contradicting themselves, and I had no idea what to do.

“Do intermittent fasting! It’s great for your hormone levels,” some would say. “Eat every single 2 hours, you’ve got to get big!” others would tell me. The power lifters told me to focus on strength training, the bodybuilders told me to focus on building mass…just about everyone had their own thoughts on getting from skinny to buff.

I didn’t realize it at the time, but this feeling set me down a path that would take me on one of the wildest rides of my life. Like many of us, working out and putting on muscle is a journey, that teaches us about inner strength, courage, discipline, and of course, our own biology.