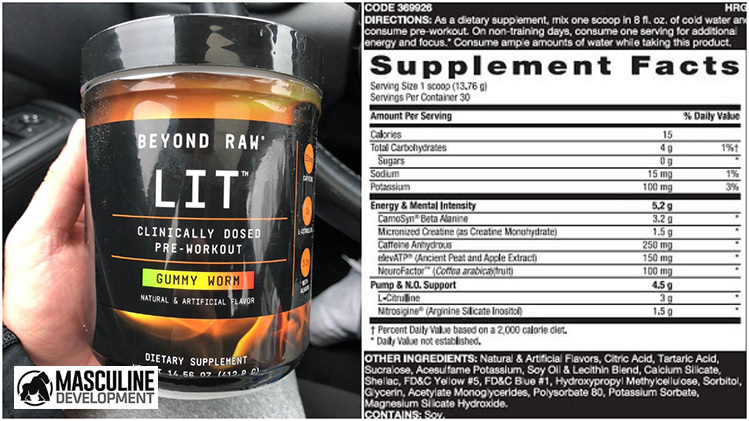 You may or may not have heard about “Beyond Raw LIT,” one of the latest pre workouts to hit the market.

…and while it’s gotten a lot of gleaming reviews lately, I wanted to give my own personal review of this pre workout, and see if it’s worth the cost.

Here is what we will cover in this article:

So, if you want a full, in-depth review of the Beyond Raw LIT pre workout, then strap in, grab some coffee (or pre-workout), and let’s get started. 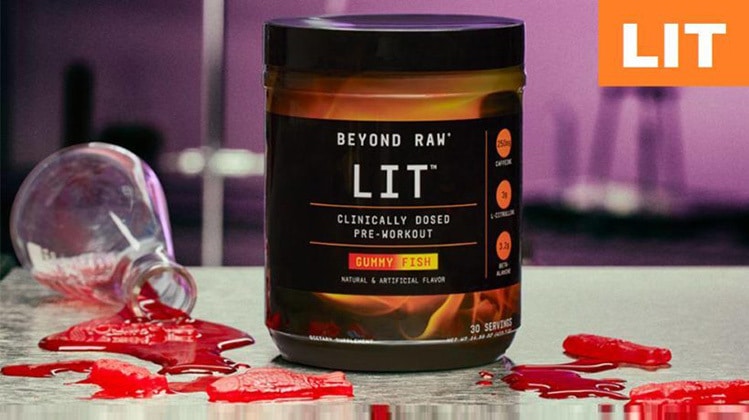 Before I get into the nitty-gritty of things, I want to give a brief overview of this supplement, how effective it is, and if it’s worth it.

Overall, Beyond Raw LIT is one of the best pre workouts on the market. It’s got a ton of caffeine, a lot of citrulline, and tastes great.

That being said, it does have some drawbacks. A lot of the ingredients are under dosed, and it’s a bit overpriced.

The energy you get from it is pretty good, although it could be better. It’s personally not my favorite pre-workout, but it might be good for beginners.

Now, let’s talk a little bit more about the ingredients, benefits, dosages, and what you can expect if you decide to take this pre workout.

While Beyond Raw LIT doesn’t have as much caffeine as Nitraflex, for example, it still has a great lineup of ingredients.

Here are the ingredients in Beyond Raw LIT:

Now, I’m sure that a lot of these ingredients might be confusing to you, so I’m going to break them down, step by step.

Each of these serves a critical role in making LIT Pre Workout do what it does best: give you great focus, enhanced cognition, and great pumps.

So, let’s break these ingredient complexes down, and talk about the ingredients in each one, as well as the benefits. 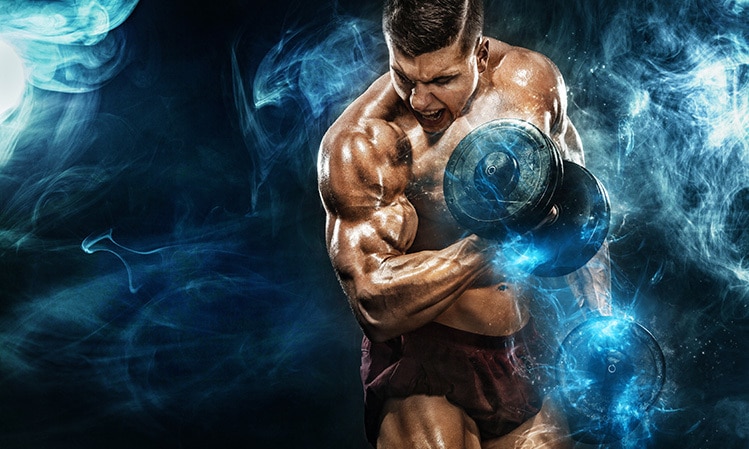 The Beyond Raw LIT energy complex is actually quite impressive, even though I don’t think it’s the best pre workout on the market.

What’s impressive about this complex, is that it has several nootropics, which are basically just brain-enhancing ingredients.

Some of these ingredients, like creatine or beta alanine, are commonly found in pre workouts. Some however, are not.

It’s also the ingredient that gives you the “tingles” you often get when you take pre-workouts. This is a good thing.

The dosage of 3.2mg is a great dosage, because it’s enough to improve endurance, but not so much that you get nasty side effects.

While creatine is one of the best muscle building supplements on the market, unfortunately, this is pitifully under dosed.

It’s recommended that you take at least 3 grams of creatine for workout performance, and 5 grams is optimal.

Thus, Beyond Raw LIT does have some creatine in it, but it’s not enough to give you the full benefits of creatine that you’re going to want.

While Beyond Raw LIT does have more caffeine than the C4 pre workout, it’s still not as much as Nitraflex, Stim Lord, or other pre workouts.

This may be good for beginners, however. Sometimes, too much caffeine can actually backfire, and give you anxiety, insomnia, and the jitters.

So, if you’re a beginner, LIT pre workout may be a good choice for you. If you’re more advanced, however, consider a different one.

This is one of the reasons I really like Beyond Raw LIT pre workout.

This ingredient is a mix of powerful adaptogenic mushrooms, which boost endurance in the gym. Onnit’s Shroom Tech Sport is similar to this.

In my opinion, adaptogenic mushrooms are one of the least explored performance enhancing supplements, so I love that this is in here.

This is another reason why I like the LIT pre workout. Neuro Factor is a particular form of coffee extract, which has a ton of benefits. 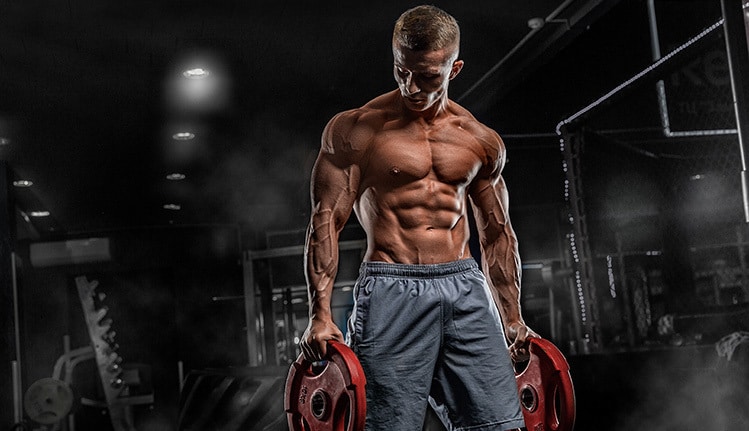 While the Beyond Raw LIT pre workout does have a pretty decent energy complex, the pump complex is pitifully lacking in substance.

There’s only two ingredients in the pump complex:

That’s it. Most pre workouts have at least four ingredients in their pump complexes, and while this one isn’t bad, it certainly doesn’t stand out much.

Citrulline is one of the best pre workout ingredients for getting crazy pumps, and 3 grams is definitely enough to see some benefits.

L-Citrulline, a more bio-available form of Citrulline, is broken down into L-Arginine by your body, which then creates nitric oxide.

Nitric oxide is what gives you pumps in the gym. It enhances blood flow to your muscles, which means they can work harder and longer.

Nitrosigine is a more bio-available form of L-Arginine, so it also helps a lot with pumps… and while this ingredient isn’t common, it helps a lot.

The purpose of this ingredient is to further enhance your pumps. It’s basically just a form of L-Arginine, bound to silica, for easy absorption. 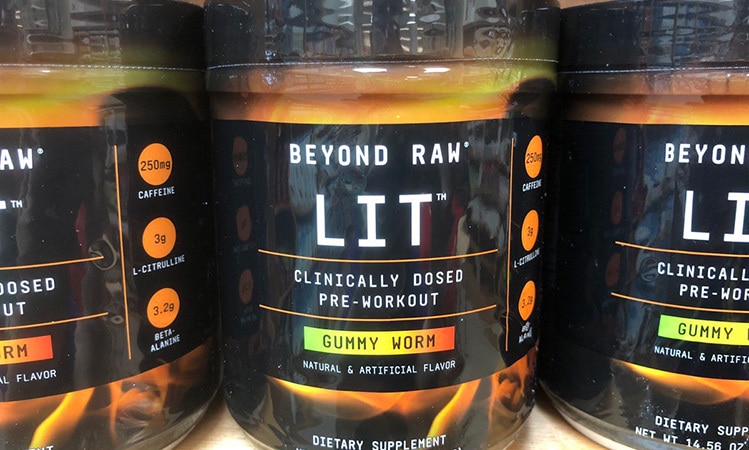 As I said previously, Beyond Raw LIT isn’t as strong as other pre workouts, but it does still have a lot of unique benefits and properties.

Here are some benefits of taking LIT pre workout:

You’ll get most of these benefits from taking any pre workout, but in my opinion, the #1 reason to take Beyond Raw LIT is for the nootropics.

This pre workout is quite unique, in that it uses adaptogenic mushrooms and Neuro Factor coffee extract. Not many pre workouts do this.

If you want a decent amount of energy in the gym, with more of an emphasis on focus and intelligence, then Beyond Raw LIT is for you.

If, however, you’re looking for more of a testosterone-boosting, pump-enhancing based pre workout, then I would skip this one.

Beyond Raw LIT Side Effects 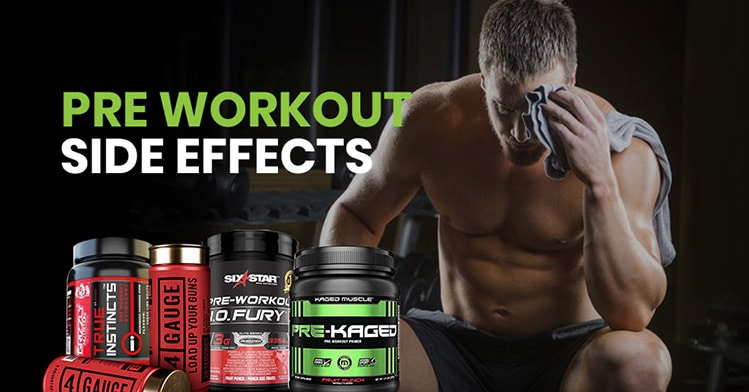 As with any pre workout, if you take too much of it, there’s going to be side effects… and you’re going to have a bad time.

That being said, most pre workouts have minimal side effects, unless you’re taking way too much of them.

Beyond Raw LIT has minimal side effects, and as long as you stick within the recommended dosage, you should be fine.

Of course, if you have any heart problems, it’d be best to avoid taking pre-workouts, but hopefully that isn’t you.

All in all, Beyond Raw LIT is a great pre workout, with a decent energy complex, and a few good nootropics to boost cognition.

That being said, the pump complex is absolutely pitiful. It really falls short, so if you want great pumps, I urge you to look somewhere else.

The biggest benefit of Beyond Raw LIT is the nootropics. Most pre workouts don’t have these, so this is rare.

Aside from this however, most of the ingredients aren’t that special, and some of them are extremely under dosed.

If you feel like I left something out of this article, then let me know in the comments section… and as always, I’ll see you guys next time!

Previous Post GAT Nitraflex Review: Is It Worth The Hype? (2020) Next Post Jack3d Review: The Return of The BANNED Pre Workout?