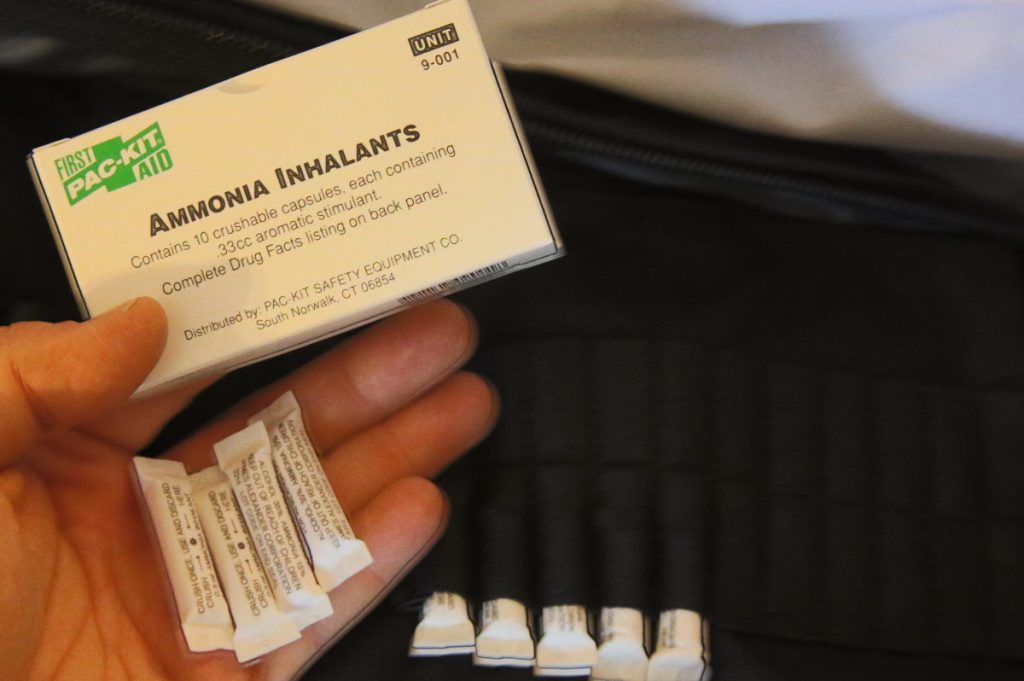 Ammonia inhalants, also known as “smelling salts,” are commonly used by powerlifters right before they go on to break some world record. In fact, that’s how I first learned about this crazy technique—by watching all of those crazy “Powerlifter Deadlifts 1,200 Pounds!” videos on YouTube.

I noticed that right before they would do some crazy, hulk-like lift, they would always smell something…I just didn’t know what. Well after doing some research, it turns out they were using something called “smelling salts” to boost their lifts.

Ammonia inhalants are like taking a hit of crack cocaine right before you do your workout. Simply take one of these bad boys and carry it around in your pocket (or gym bag) until you’re ready to do your most difficult lift. Take it out, crack it open, and sniff—you’ll be on a freight train to gainsville.

When you pop the little canister inside of the packet (by simply squeezing it), a chemical reaction occurs that emits ammonia. By smelling it, you jack your adrenal system into overdrive temporarily, causing a surge of adrenaline and norepinephrine to rush through your blood. So you can say hello to bigger muscles, and better lifts.

Okay, okay—I know that I’ve been talking about SARMs so much lately, but that’s just because they’re awesome. As I detailed in my Ultimate Guide to SARMs for Beginners, they’re basically like “legal steroids” with all of the benefits…and none of the side effects. Yes, it’s actually the case. No, it’s not “too good to be true.”

Pioneered in the 1990’s by small pharmaceutical research company known as GTx Pharmaceuticals, these compounds quickly spread throughout the underground bodybuilding world like WILDFIRE. Without going into the science too much, they basically act like steroids, but don’t give you any of the bad side effects (like bitch tits or shrunken testicles).

I’m currently on a 12 week “cycle” of Ostarine, Ligandrol, and Cardarine—and BOY do I have to say that the gains have been GREAT. I’ve successfully been able to shred off pounds of fat, while simultaneously building slabs of muscle. Better yet, it’s helped me blast through my personal records at the gym.

Believe me when I tell you that SARMs are the real deal. They’re easily available to anyone who wants to buy them, act on the same receptors that steroids affect, and have almost NONE of the negative side effects. Don’t take my word for it, though—just look at what the FDA recently said. They’re trying to ban them, so get them while you still can.

Ah, Modafinil vs. Adderall—the age old debate. Which is better? Well, it turns out that they’re both in their own unique ways. While modafinil seems to excel at anything requiring higher cognitive function (such as writing an in-depth article or brainstorming a new product), it turns out adderall is actually better for simplistic, reward-based activities.

When I use adderall (or modafinil) at the gym, I find that my lifts are LASER-FOCUSED. I literally feel like a god damn samurai whose sole focus in life is to destroy every single pound of iron that I’m lifting off the ground. It’s an exhilarating rush, and let me tell you—it’s the big, dirty secret of the bodybuilding world that nobody talks about.

That’s what I’m here for, though. Your good old Uncle Jon doesn’t like to bullshit you, so here’s the truth. Almost every single bodybuilder in the pro leagues is on some form of stimulant. Whether it’s cocaine, MDMA microdoses, or Adderall, they’re using something to get extra energy, burn fat faster, and blast through the plateaus.

“B-b-but Jon, don’t they test for that type of stuff?” is the most common question I get. Yes, of course they do—right before a tournament. So what do you think these bodybuilders do? Wow, whoopdee fucking doo, they just stop taking it a month or two before their test, so they don’t set off any red flags. Be like them (or maybe not).

No, not THAT type of gym gear—I’m talking about the equipment that enhances your lifts. While it seems obvious, just simply using something like chalk, knee wraps, or a lifting belt can have an immediate and drastic affect on how much weight you can lift.

In my article on Gym Gear, I discussed four major types of equipment you can use to break PR’s:

Using all of these, especially on your strength days, will help stabilize and support the weaker joints and tendons in your body so that you can be free to utilize 100% of your muscle power. Simply using these things can instantly result in a 15%, 20%, or even 25% increase in your lifts.

Be sure to use gym chalk, as well. While it might seem stupid or simple, just having a stronger grip can drastically increase your PR’s. I personally use Fire Team Fit’s brand of Liquid Chalk, because it’s easy to use, easy to carry around, and doesn’t cause any mess. Just squirt some of it on your hands, let it dry in seconds, and proceed to bust through those plateaus.

We’ve all been there. Whether it’s that you’re a newbie and can’t seem to get past bench pressing 145, or you’re a seasoned veteran trying to up that deadlift to four plates, we all experience plateaus. We all get stuck sometimes, and can’t seem to lift anymore weight, no matter how hard we try.

…but like I said, the answer isn’t always to “try harder” but rather to “try smarter.” While you’ll always have to exert force on those barbells, there’s little tips and tricks you can use to increase that force by a landslide. Just try some of the tips I pointed out, and trust me, you won’t be disappointed.

For those of you who want a detailed guide to bodybuilding, I lay down all of the nitty gritty, dirty details in my “Body of an Alpha” package. It comes with three free eBooks, plus access to a special Facebook mentorship group. I also cover everything from nutrition to supplements to working out to recovery. It’s my bodybuilding bible.

To all my readers, I hope you all gained something from this post. Be sure to try out some of the tips that I gave, because they’ve REALLY helped me take my lifts to the next level. As always, I’ll be putting up new content in my free time, and if you have any questions, comments, or concerns, feel free to leave me a message down below!

Coastline Kratom Review: Are They The Best Kratom Seller in 2020?