Have you ever been a girl’s beta orbiter before? Whether you realize it or not, you probably have.

100% of men have been a beta orbiter at some point in their lives, but unfortunately, most don’t ever realize it.

When a girl makes you her beta orbiter, she wastes your time, your mental energy, and your resources… and that’s not something you should stand for.

In this short, to-the-point article, I’m going to present you with the three biggest signs you’re being turned into a woman’s beta orbiter.

More importantly however, I’m also going to tell you how to escape this beta orbiter zone, and live the life you want.

What is a “Beta Orbiter”?

A beta orbiter is basically when a girl keeps you around as a “backup.” It’s when she’s not completely sure what she thinks about you, or maybe she has some better man in her life, so she keeps you on the back burner in case she gets lonely or needs emotional support.

This is different than just “being friends” however. Women keep beta orbiters HOOKED by either explicitly or implicitly promising them a chance at sex, when in reality, she knows it’ll never happen.

Like it or not, this is the way the dating game is played. Women want to have plenty of options, and they usually do. Most women have a “Chad Planet” in their life, who undoubtedly knows how to be an alpha male. Then, there’s the rest of us—they get slotted as beta orbiters.

The thing is though, nobody can MAKE you a beta orbiter. This is the good news. It doesn’t matter how hard a girl tries to keep you “on the hook,” because if you recognize these signs, she will have no power over you. First though, what actually CAUSES a beta orbiter?

The Root Cause of Beta Orbiters

So, when a girl comes into your life, you don’t feel like you could ever get a new one. You’re desperate for her approval and attention, so you become vulnerable to manipulation. She becomes your oneitis.

The key to escaping the “beta orbiter zone” is to simply move on and improve your game. Stop trying to chase the one girl in your life, and instead focus on creating abundance.

The only way to TRULY escape the “beta orbiter” zone is to develop enough game so that you’re satisfied with your dating life as it is. This is how female hypergamy works, plain and simple. Woman want to date UP, not DOWN.

You don’t need to become a Brad Pitt or Leonardo DiCaprio, but simply having a few solid girls that you’re dating will do the trick. You make yourself vulnerable to being a beta orbiter when you don’t have any options in your dating life.

While this may make some men upset and bitter, it’s just a fact. So rather than becoming bitter, learn to become better. Take your life into your own hands.

With all of this in mind, here are the top signs that you’re being used as a beta orbiter. Again though, don’t get mad.

Although it may be a first natural instinct to get upset over female hypergamy and turn to the black pill, anger is an obstacle to accepting reality for what it is.

As always, take these signs with a grain of salt. Some of them may just be coincidental, and maybe she really DOES have some interest in you.

If you’re reading these signs however, and many of them ring true as a bell, you’re likely being kept on the back burner. ESPECIALLY if they’re recurring.

1. She Continually Flakes on You

The first sign that you’re a beta orbiter, is that she constantly flakes on you. One of the biggest problems that men encounter nowadays is the flaky nature of young women. They have plenty of options, and will often cancel on you if it means they can hang out with Chad.

Of course, there are plenty of women who WILL honor their commitment—you just have to discern them for yourself. Even so, if a woman continually flakes on you, more than once or twice, she’s almost always stringing you along… or it’s some form of a shit test.

I personally have a one flake rule for women I’ve never slept with before. If she flakes on me the first time, I don’t invest any further effort into her. I don’t text her first, I don’t ask to hang out, and I only offer half the effort she offers me back.

This isn’t mean. It isn’t cruel and it isn’t manipulative. It’s just not wasting your time on women who aren’t interested in you. If she does happen to text me back apologizing, and asks to hang out on a different day, I will consider doing so. She should be proactive though, otherwise she’s likely not interested.

2. She Never Actually Sleeps With You

A woman’s sexuality is her strongest card, and every woman knows this. They know that men want to sleep with them, and they know that you are no exception. While there’s nothing wrong with this, it can sometimes take the form of manipulating a beta orbiter.

If a woman continually acts as if she’s sexually interested in you, and then never actually ends up having sex with you, she’s likely stringing you along. Again though, I cannot emphasize this enough—DO NOT GET MAD AT HER. Just move on and improve yourself.

If you want to know how to get laid, this is one of the hardest lessons to learn. Sometimes women won’t want to sleep with you—and that’s okay.

Anger serves no purpose aside from spurring you to action, and in fact, it’s very toxic at times. Use this anger to create change in your life. Leverage it so that you are no longer a beta orbiter, and instead, are the Chad Sun.

3. She Refuses to Be Alone With You

Women know that when they’re alone with a man, the possibility of sex arises. It’s just natural then, that she won’t want to be alone with a man she considers a “beta orbiter.” So instead, she’ll do everything she can to always have a third or fourth person in the room.

If a woman is genuinely interested in you, she will have no qualms about being alone with you. In fact, she will actually PROACTIVELY try to set up a situation where she can be alone with you. I have had this happen multiple times, to the point of absurdity and cosmic irony.

Learn to recognize her IOI’s, and determine whether or not she’s into you… but like I said, if a girl always refuses to be alone with you, the chances are, you’re her #1 biggest beta orbiter.

While it may be painful to realize you’ve been toyed with this entire time, it is necessary that you face the truth head on. Encountering the true nature of a toxic social interaction can sometimes be painful, but you will always emerge a more enlightened man.

In my experience, the BIGGEST indicator that she’s leading you on, is simply the flakiness. She will always come up with excuses to avoid you, and as a man, if you’re foolish enough to believe her, it’s your fault. Women use language figuratively, men use it literally.

The fact of the matter is that we’ve all been a “beta orbiter” at some point in time, but once you have this knowledge, there is no more excuse. If you’re interested in a woman, simply give it your best shot. If she doesn’t reciprocate your interest, then that’s fine—just move on.

Learn how to get laid on Tinder, so that you aren’t always desperate to get laid with girls who aren’t into you. You’ll find that when you take an intelligent approach to socializing, and only invest in people who invest in you, your life will improve by hundreds fold.

Want to 10x Your Dating Life? 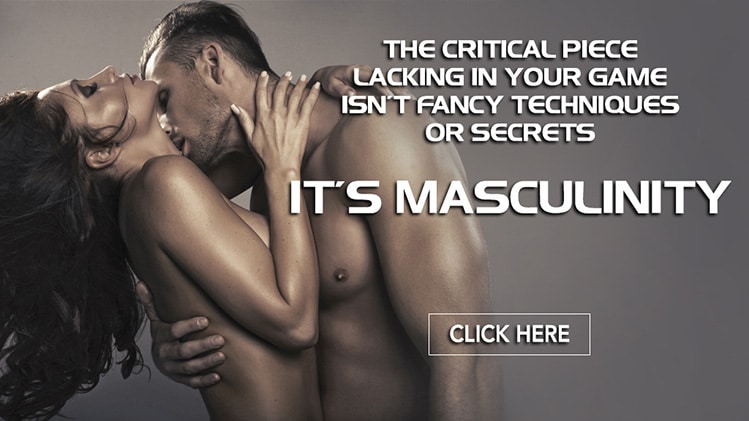 In conclusion, most women have their own personal squadron of beta orbiters flocking around her, ready to give her validation at any and all times. This is just the reality that we live in, and it’s not something to be upset over. Just accept it, and move on.

Learning to recognize these signs is incredibly liberating, because not only will you save hours of countless frustration, but you’ll also be able to use your resources more productively. Spend money, time, and energy on women who care about you—and ignore the ones who don’t.

If you’re looking for the easiest and fastest way to become an alpha male, look no further than my 7 Strategies program.

Within a matter of weeks, you will learn to bypass the bullshit, cut through the crap, and 10x your attractiveness to women by evolving into a masculine alpha male.

Here’s some of what you’ll get with the 7 Strategies program:

So, if you want to start getting laid with hotter girls WITHOUT becoming a douchebag, consider checking out the 7 Strategies Program today.

As always, I hope that you guys enjoyed the article. Ask yourselves: how many of these signs is your “oneitis” showing you? If it’s more than zero, it may be time to move on.

Either way, if you have any questions, comments, or concerns, feel free to let me know down below. I’ll see you next time.

7 Dirty Pick Up Lines Guaranteed to Make Her Laugh

How to Get Your Ex Girlfriend Back: 4 Steps to Win Her Over!

Previous Post The Ultimate Guide to Oneitis: How to Cure it and Come Out Stronger Next Post What Are Nootropics? A Beginner’s Overview of Smart Drugs